‘Kevin? Kevin are you up there?’

Her voice pierces the still air; all my thoughts of inventory and schedules are wiped away in a moment.

‘Aye, I’m up here. C’mon up, love.’ I call down to her; from far below I hear the groan of our old metal ladder. I’ve always wanted to fix it, but I lost the oil and I’ve never cared enough to go looking for it.

‘I brought some scones. How’re you doing up here?’ She shouts as she ascends, her mess of wavy blonde hair appearing above the top of the ladder, the rest following shortly after. She is as beautiful as she ever has been; even if her clothes are little worse for wear these days. Her green eyes shine inquisitively as she looks around the little den I’ve made in our storeroom, her chapped lips are as stunning as the day I married her; I never feel luckier than when I see her face for the first time each morning.

‘It’s going alright, just doing a stocktake of the library. Dustin’s got plenty left to read, y’know. He’ll not be bored any time soon.’

‘You’ve been spending most of your time up here the last few weeks, love. It can’t be healthy, all this dust, and so close to-’ her voice drifts off to nothingness, and we can’t help but glance up at the little steel ladder leading up to the surface. Brilliant white light pours through the inches-thick glass.

‘I’m fine, hon.’ She looks at me sceptically, ‘Honestly, I’m alright. I just wanted to double check everything.’

‘Well what else am I going to do?’

I just sigh, and stare at the ground. She ambles over to me, ducking her head beneath the steel ducting attached to the low ceiling; the web of steel pipes that runs through our house, supplying life-giving air and water. She puts the scones down on the table and I feel her hands snake around my shoulders. I just breath into her arms as she holds me. 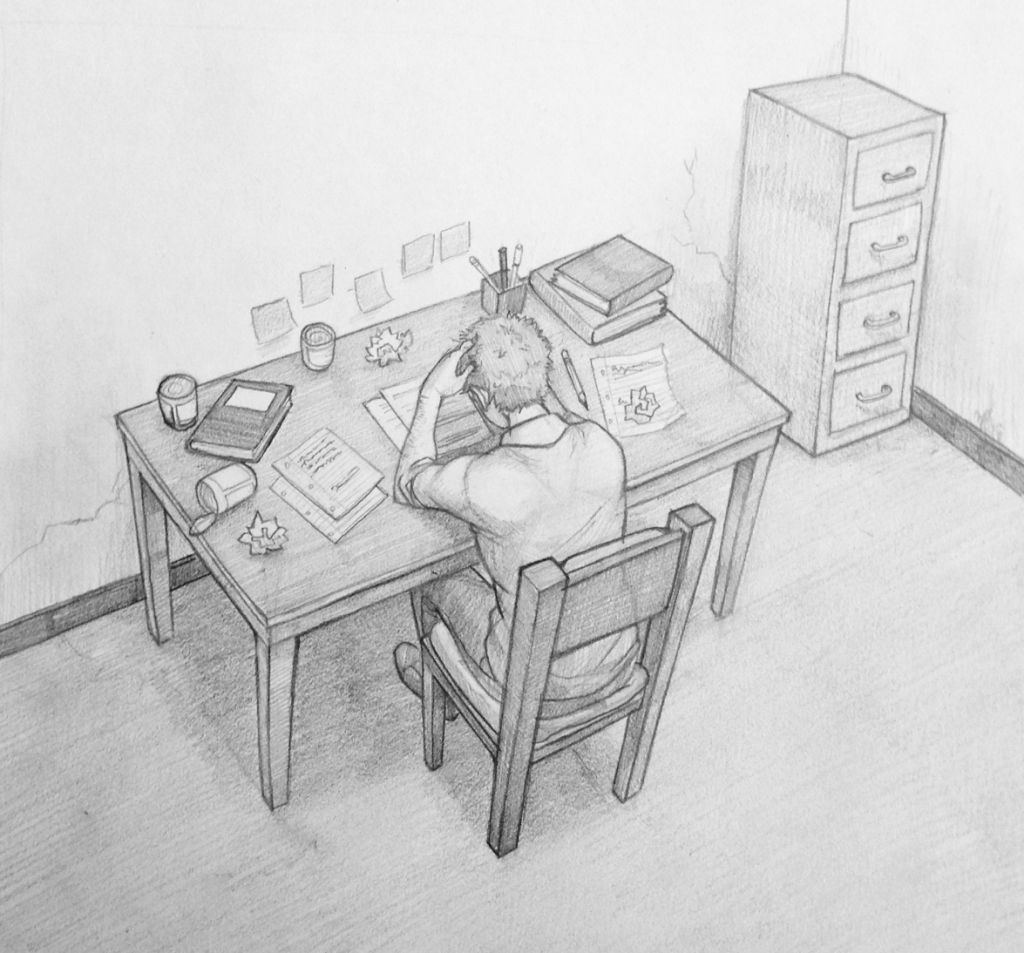 ‘You’ve done more for this family than I can ever say. You know we both appreciate what you do.’

‘And you. We wouldn’t have half this stuff if it wasn’t for you.’

‘How are we looking on that front, anyway?’ She asks, beckoning to the massive storeroom we keep in the roof of our underground home.

‘We’re fine on water. Decades of the stuff. Enough books for Dustin, if he spaces them out a bit. There’s even a board game with all the pieces. Wish we’d known about that one sooner.’

‘But what about the food, Kevin? How much food do we have left?’

That look on her face; like a child that knows you’re going to take away their candy.

‘We’ve got maybe three years of food left, for the three us.’

‘But that’s not enough!’ She cries.

‘So, is it-‘ Her voice trails off once more; she’s always struggled to talk about this.

‘There’s no hope of that. The hole’s just too big; the sun is still scorching the surface. There’s no way he’ll be out of here in three years.’

‘What if only one of us leaves?’ She asks, frantic. Leaves is a funny word; she makes it sound like we’re just popping to the shops. ‘What if just I leave? Then you could take care of him for, what, five years, at least?’

She looks dejected; but she knows I’m right.

‘Will there be others, Kevin? Will he ever get to meet other kids like him?’

‘I hope so. God I hope so. He’s never even been above-ground; we’ve got to hope he’ll be ready.’

‘I hope so. God knows we’ve prepared him as much we can, and left him all we could. Kid’s got the most planned out life there could be, we’ve even sorted his books by which year he should read them. We’ve been preparing for this, hon. It’s time.’

‘Still in bed. He was having nightmares again last night.’

‘I can’t even say goodbye?’

‘We talked about this; how’re you even going to begin that conversation? Better we just leave him the notes we wrote. They’re on my table here; he’ll come up looking for us when we’re not in the bedroom when he wakes.’

We don’t say another word. I lead my darling wife over to the ladder, and we ascend. Slowly, I spin the hatch to open the first seal, and we clamber into the airlock. It’s incredibly warm; we’ve never had to worry about heating our little underground shelter, the heat from this little access way to the surface has always been enough. Too much, sometimes.

I seal the airlock below us, and nod to my wife. Together, we open the exterior hatch. She’s the first to begin clambering the little dirt slope to the surface proper. Her hair is already twisted and burning by the time we reach the top. I look at my skin and see it peeling; raw red flesh curling and breaking in the scorch.

We sit together on the charred ground, staring at each other. I take one cursory glance around; my first sight of the surface in, what, seven years now? It’s the wasteland I knew it would become when we descended. The buildings are blackened husks, and the beautiful forest that sat behind our little garden is a flattened grey-black plain of char now.

I stare into my wife’s perfect blue eyes. Her clothes have caught, now. She’s almost gone, I think; I reach over and wipe away new tears in her eyes. It’s difficult. So difficult. Every gasping breath is hot; my lungs are burning and my skin is almost gone.

It’s too bright; but she’s still just so beautiful.