OK, hi guys. I’m Oli. My brother started blogging recently, and he told me I should start one, so…here I am! You might have heard of him, he’s pretty big, apparently. He’s http://www.andrewsgolfworld.letsgoablogging.org.net.

So, this is going to be my blog. I’m hoping it will be sort of a blog of my writing, I guess? I don’t want to post my actual work up here – can’t have my stuff stolen! But I’ll be posting some of my thoughts and experiences while I write.

Have a good day everyone! See you soon!

I haven’t written anything today. Couldn’t think of an idea, y’know? I’m working on this really cool universe in my head, but I think it needs more time.

Sorry for the silence last week everyone. I haven’t got much writing done since then; but I drew some art of one of the characters I made! I’m not going to post it until I write the story though, spoilers! (Secret: Have you ever seen a guy with a sword for one hand and a gun for the other? Get hyped!)

Hey! God, I’m so sorry for not posting anything for so long guys. I did some writing at school in English, but it’s been a busy time for me. It’s the Christmas holiday now though, so I’m trying to get a story idea I had with a friend written down on paper. He says he knows a publisher, it’s going to huge!

Jeez, I still have this? Why wasn’t this deleted years ago?

Hell, if it’s here, might as well use it. As you might expect, a lot has happened in four years. I have a degree now, in English lit. I’ve spent 4 years working on it, and I don’t feel like I understand it at all. I’m not qualified to read the classics, yet alone try writing one!

A friend of mine told me something a while ago, and it really resonated with me. Apparently it takes 10,000 hours to master a skill. Like, choose something you really want to do – spend 10,000 hours doing it, and you’ll be a master! That’s a lot of work; but I mean, you have to spend your life doing something, right?

I wonder how long it would take to master something. I’ll run the numbers someday.

OK, so I ran the numbers – if you were to work hard at something, like, really hard – twelve hours a day, every single day hard – it would take three years to master something. Just three years!

You’d have to really want to do it, and you’d break your back in the process, but you’d be a master in just three years! Hell, even if you took it a little slower you could do it in four or five.

How can anyone just stand still? Why keep doing something when you’re a master though?

Three years. It would take three years to be a master of something.

Three years, and instead I’m wasting my time sitting through screaming matches and being forced to watch kiddie Christmas specials.

OK, this is going to be a little tricky. I can’t be bothered editing this one so just…just read, OK?

I know my family have seen my blog. I know you’re all reading this right now – how long did it take before you checked here, three days? Four?

While you’re all sleeping the day away or recovering from hangovers I’ll be leaving. Going. Gone.

You’ll hear from me again. Bookmark this page, huh? It’s going to be a while, though.

Six days! Jesus, you people! Did you not get at all suspicious that I wasn’t answering any calls or texts?

Where? Well obviously I’m not gonna say. I’m OK though. I hope you wanted to know that.

Oh, I saw a few more people had started visiting my blog too – uh, hi. I’m not going to be posting for a while, but enjoy what you see.

OK, here goes. I’m going to tell you where I am; what I’ve been doing.

For the last few years I’ve been in Egypt, a lovely woman living near Cairo took me in and fed me, in exchange for seven days a week of help in her shop.

Femi, that’s her name, is a lovely old lady. Brilliant with her hands; she makes fabric all day, every day. Every morning at about seven we’d both start weaving, and at nine I’d open the little shop and sweep, before getting back to the craft.

Usually that would be my whole day; she didn’t want me to deal with customers, so I’d keep weaving. Femi would bring me lunch and dinner while I worked. Sometime after it was dark I’d go to bed, and back to it the next morning! I’ve had quite the number of dreams of textiles, I’ll admit.

Femi says I’m a natural. When I told her I was leaving she did everything she could to make me stay – her little shop has become quite the sight to see this year! I think she’ll hire someone now I’m gone, I can’t imagine she’ll want to go back to doing it on her own.

It’s really hot where I am now, too. Hotter than in Cairo. Hope everything is going well back home!

Alright, you want the details about where I’ve been the last few years, right? OK!

I moved into a big community farmstead in Namibia. The owner, Zona, is a really nice guy – he gave me a bed without a second thought. The whole community kind of came together to teach me the basics of the farm to begin with, and soon I was out there every day with them.

The food – God, the food was to die for. There was a woman, Mel, she worked out on the fields every day with the rest of us, and yet every evening she somehow had the energy to make…my god, the things that woman could do with a kitchen. I don’t think I’ll ever taste anything as good again.

I made a few friends while I was out there; some truly amazing people. They asked me for an address when I left; so they could send me a letter every once in a while. I didn’t know what to tell them.

Boy, phones have gotten popular recently, haven’t they? I’m not going to get one. My last one broke years ago!

The look on the security officer’s face when I went through without anything – no bag, no belt, nothing to check in – it was priceless!

Just my wallet. Need to pay to get around somehow. My card expires in a few months – I hope I can get one shipped!

When did people start following my blog? I had so many notifications to sort through when I logged in, I’ve been at this a couple of hours already!

OK, what have I been up recently then? Well, I’ve attached a picture to this one, it’ll give you a pretty good idea! Hah, yeah, I have a beard now!

I’ve been in Salviria – I signed up with a militia, though we pretty quickly just got absorbed into the regular forces. They had weapons but no-one to use them – so after a few wary glances and pointed questions they put a rifle in my hands and told me where to point it.

I know some people will be disappointed in me for this one. It’s just…you should meet these people. They’re good people, and they just want to get back to their lives, their homes. Just, maybe don’t judge from so far away, OK?

I made some friends I won’t forget, I can tell you. I couldn’t give them an address, a phone number – I’ll never see these people again, but they mean the world to me. Some of them risked their lives for me in ways I never thought possible; and others I’m proud to say I risked my life for.

I turned forty a few weeks ago. Forty years old. I don’t know what to do with that number.

But you don’t care about that, do you? You want to hear about where I’ve been this time.

I’ve been living with an Innu family, in northern Canada. I won’t say where – it seems my little blog has become quite popular recently, I don’t want to inflict anything on the village, or the family who trusted me when many wouldn’t.

It took me a long time to find a family who would take me in and teach me – but Wapaskw brought me in with open arms – literally, she smiled and hugged me the second she opened the door.

She taught me to work with leather for the first few weeks, until I earned some trust in the community. Then a group of young men agreed to take me out to hunt, and I spent much of the rest of my time there with them.

Where am I now? A little café in Toronto, called Hungry Tums. Surprised? Don’t bother coming out, I’ll figure out where I’m going soon.

Forty years old. My leg hurts. My hair is going grey. But there’s so much left to learn. To do.

I’ll figure something out.

So much has changed. My dad died years ago. My baby sister has two children of her own.

They welcomed me back so nicely. Mum screamed when she opened the door; and when Kathy arrived with the little ones I think she almost fainted. She hadn’t believed mum on the phone, I guess.

I went to the doctor last week. My leg wound is far worse than I had thought, and the cold probably didn’t help. She told me to buy a cane, and that I might need surgery.

I don’t think I’ll be going away again.

What do I do now? 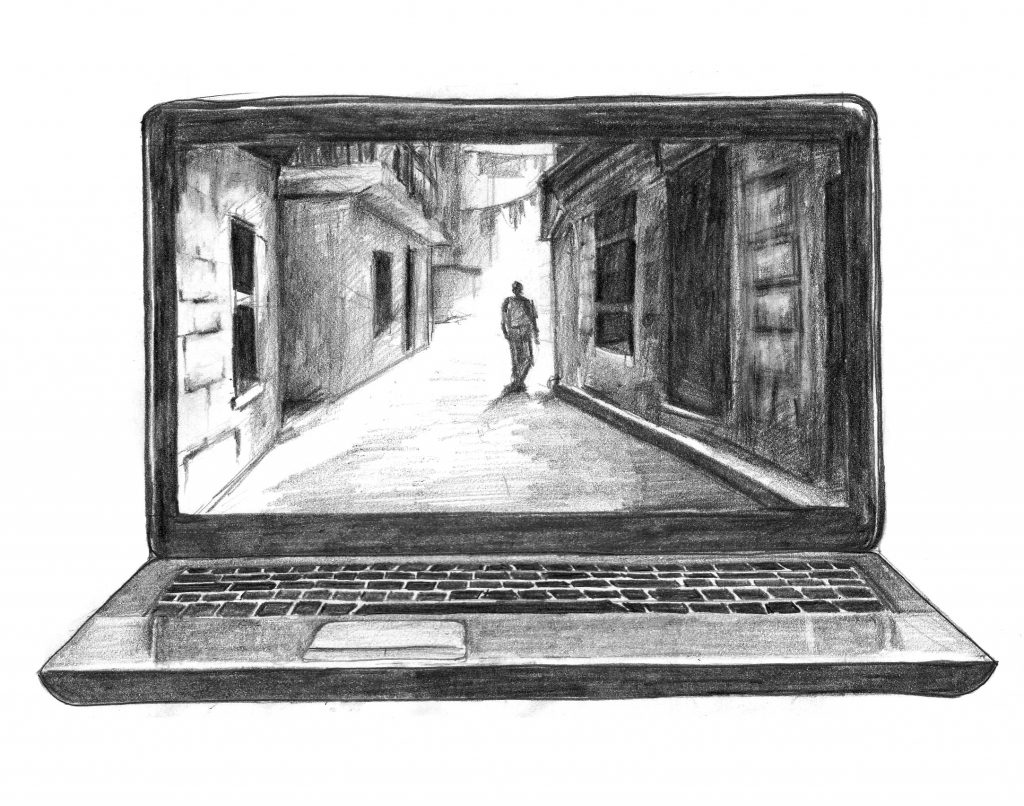 My family have barely left me alone since I got back. Every time I try to ask Kathy about how she met John she just tells me some quick story about speed dating, and then asks what it was like in Cairo, or if I ever saw a bear in Canada. They have so many questions.

I’ve been reading your comments, by the way – when I get the time! You’re all so lovely, thank you for your kind words!

A lot of you are saying I should write a book. That sounds like fun; but what would I write about?

The Desperate Hope for a Hurricane
Scroll to top