He reaches his arm out as he walks across the plains, running his hand through the waist-high grass. Far in the distance, a long grey figure tromps; a massive wolf, with bared fangs and chains around its belly. From here, he’d guess the beast is at least twenty men tall, and many more along its length.

He smiles his sad smile, and continues to walk, casually watching the wolf as he goes. It is stalking; or perhaps waiting, he assumes. Its legs are taut, its back arched. He has learned that the titans of these lands are wickedly smart, and often devious or brilliant as well. He recalls the time he entered into a drinking content with the ancient god of the giants; but that is a story he is saving for another audience. Snapping back to reality, he glances ahead of himself to see the ground ahead burst upward; a mass of land displaced in an instant. 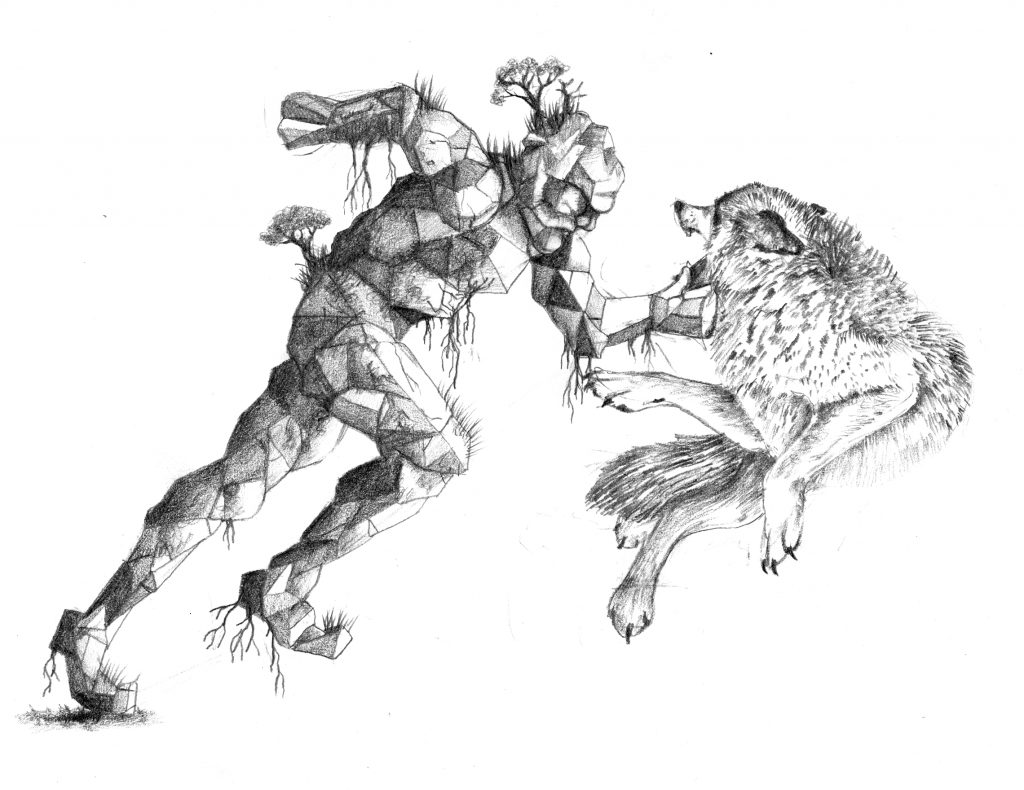 In front of him, a massive creature of stone and earth slowly gets to its feet, shaking off loose mud and grass as it ascends. Once it is fully upright, he stares dumbly at its foot; at eye level. Quickly, he darts back from the giant creature, giving it space to move without accidentally crushing him. Locking eyes with the wolf, the massive earthen thing charges; the wolf darts about it, and lurches into its side. He watches as the two huge beings become quickly locked in some great duel; the context for which he doubts he will ever know.

He has been away but two months. He is never more than a month away; plenty of time yet.

Later, he finds himself on an island. Sitting on a small pillar of jet black glass, he watches as the volcano at the heart of the island slowly pumps out boiling red liquid that pours across the ground, hardening into dark, porous rock all around. He is barely protected from the heat by the black glass surrounding him; as he sits within the curious natural outcrop and watches the cycle of this strange island, smiling his sad smile.

As the hours pass the volcano grows quiet and inactive. The island is taller now, and wider; stretching much further into the violet sea all around. As if on cue, the sky grows dark and the wind begins to slap hard against him, forcing him to hunker down and hold on tight to his small platform. With the wind comes rain, beating against the rock all around the island. The heavy droplets smack loudly into his obsidian shelter, and he covers his ears as he watches the island slowly crumble; little specks of stone dislodged by the water and turning it black; dark liquid flowing out to sea. Within an hour the island is back to its original shape; and the dislodged sediment is pulled down beneath the island in the violent tumult of the waves. Tomorrow morning, this cycle will repeat anew, and the island will regrow and crumble again.

Six months have passed since he left. Another adventure, he thinks. He has been away a long time, he wonders to himself as he begins to move.

All around him is darkness. He blinks his eyes trying to restore his vision, but all is midnight. He tries to ensure his eyes are open in the unrelenting dark; it will begin soon.

Far off to his left, a pinprick of light bursts into being. It gently illuminates a single, crystalline flower; geometric leaves softly unfurling to release a bright white light. The glowing pollen bud drifts into the air, and soon five more have appeared, released by their once-rigid flowers. Hundreds quickly follow in suit; all around him are hovering specks of red and blue and purple and white light, illuminating the endlessly midnight marsh he has wandered to. High above, the first buds are striking the thick canopy of green and brown leaves and bursting, scattering thousands of tiny points of light across the sky-ceiling. Soon, it is raining stars all around him, and he smiles his sad smile at the lightshow.

Eight months. He is only a few weeks from home. It’s time to go.

As he reaches the threshold of his old thatch house, he hears screams from within. Her screaming fills the house, and he quickly rushes to find her. As he approaches the old bedroom door, he hears new screams too; quiet, confused screams of a new life grasping for meaning.

He smiles his joyful smile for the first time in many a month, and enters the room, ready for his next adventure.

Illustration by Merle Made Tales

Did you like this short story? Interested in helping keep this site running? I’m now on Patreon, where fans can directly support creators and the work they produce! You can see my Patreon page here.

The Incredible Shadow Puppet Theatre of the Mind
Scroll to top